Dr. Patricia Welch grew up in Baltimore City and attended segregated schools until 1954 when she was part of the first desegregated class at Eastern High School. In 1989, she was appointed Assistant Dean of Education at Morgan State University, and later became Dean, a position she holds today. She also served on the Baltimore City Board of School Commissioners, starting in 1997 and as President from 2001 to 2005, when she retired from the Board. After graduating from Coppin State College, Dr. Welch taught in the City public school system for 22 years. She earned an MA from Morgan State University and a Ph.D. from the University of Maryland, College Park. 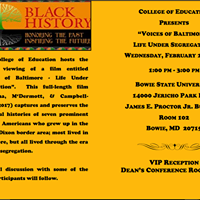 How You Can Support

While we do not charge for use of our materials, we request donations from our users. The link to support Voices of Baltimore is found at: https://towson.networkforgood.com/projects/44959-college-of-education-voices-of-baltimore